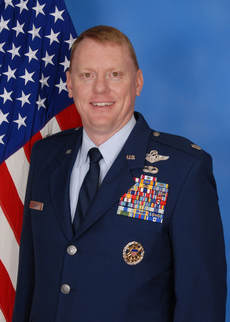 Lieutenant Colonel Yunt is in his third year at Walter E. Stebbins High School.  Colonel Yunt was most currently Chief, Joint Multi TDL School, Joint Interoperability Division, J7, CJCS, at Pope Army Airfield, NC. Colonel Yunt is a native of Louisville, KY where he was an AFJROTC cadet. After high school he attended the University of Kentucky. Upon graduation he was sent for initial qualification as an Air Battle Manager and E-3 Aircrew. He has been qualified as Combat Ready since 1998. He has served as an Air Weapons Officer, Electronic Combat Officer, Air Surveillance Officer and Mission Crew Commander on the E-3 aircraft with over 3000 hours and 11 deployments in support of operations NORTHERN WATCH, SOUTHERN WATCH, ENDURING FREEDOM, IRAQI FREEDOM AND INHERANT RESOLVE. Lt. Colonel Yunt has experience as a test officer for DISA where he worked high profile tests on IFF Mode 5, AWACS 40/45, Marine One presidential support Helicopter, F-22A, F-15C and the F-35A. As Chief of the Joint Multi-TDL school he directs the planning, programming, and execution of joint education for US students. As lead instructor he provides instruction to US and Allied students and oversight of instructor performance. In his spare time, Colonel Yunt is an avid private pilot and is active in the Civil Air Patrol. Colonel Yunt is married and has two children, ages 11 and 5. 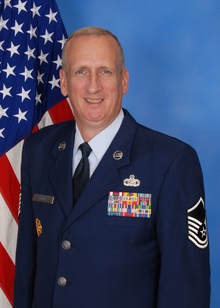 Master Sergeant (retired) Hood has been the Aerospace Science In﻿structor at Walter E. Stebbins High School since August 2006.  He was named the Stebbins High School Teacher of the Year for 2010-2011 and AFJROTC Outstanding Instructor with Merit.  Sergeant Hood retired from the United States Air Force on 1 August 2006 after 21 years and five months on active duty in the Information Management career field.  He holds a Bachelor of Science degree in Organizational Leadership from Wright State University.  He is a Fellow, past national president and  director of the National Speleological Society.  He's a life member of Huber Heights Memorial Post 3283 of the Veterans of Foreign Wars, the Mad River Lions Club, and the American Legion.  He was inducted into the Decatur Central High School Athletic Hall of Fame in December 2010.  His Air Force  decorations include the Meritorious Service Medal with two oak leaf clusters, Air Force Commendation Medal with three oak leaf clusters, Joint Service Achievement Medal, and the Air Force Achievement Medal with three oak leaf clusters.